A teapot, stool, and letters, which reputedly belonged to Cotton, are on view in the open stores in the Regional Resource Centre.

Several scenes in the macabre story were filmed at Beamish last October, including in the Co-op hardware and drapery and in The Colliery Yard.

Cotton was convicted and hanged in 1873 for the murder of her stepson, Charles Edward Cotton, though she may have had as many as 21 victims, including three of her four husbands and 11 of her 13 children.

She used arsenic to poison her victims, administered in a comforting cup of tea, made in a small teapot reserved for the purpose – and what is believed to be this little piece of pottery is part of the museum’s collections. 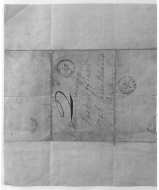 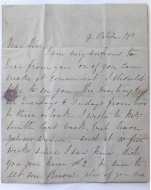 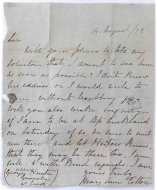 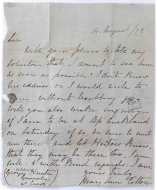 The small, black Wedgwood teapot was donated to Beamish in 1972, though at the time its background was unknown. Then, in 1989, a letter from the daughter of the donor explained where the teapot had come from.

The GP who donated it had inherited it, via his step-mother, from his step-grandmother – the wife of a GP in West Auckland, County Durham, where Cotton was living in 1872 at the time of her arrest. His grandmother had been given the teapot by an old lady in West Auckland who had become fond of her – a very strange gift as a token of affection!

The donor had never felt comfortable with ownership of the macabre relic and was persuaded by his family to send it to Beamish.

A small, worn three-legged wooden stool was also donated to the museum in the early 1970s by a local woman, with the story that it had belonged to Cotton while she awaited trial and eventual hanging in Durham Jail.

More recently, a number of photocopies of letters, which appear to have been written by Cotton, arrived by post. Written on County Gaol Durham embossed notepaper, the copies were sent anonymously by their current owner, who felt that the museum should have them for the archive.

They had been bought from eBay, but it’s believed that these letters were sold to a dealer by a North Yorkshire auction house in 2013.

The handwriting is difficult to decipher, but the letters make reference to solicitors and financial problems. One, addressed to Mr Lowrey (Cotton’s lodger at the time of her arrest) contains a plea for money to buy clothes for ‘the child… to come out with’ – presumably for her daughter who was born in the jail, and was adopted before the sentence was carried out.

All of these objects, along with photographs of the ITV crew filming the drama at Beamish, will be on display in the open stores until the end of December.

Beamish Museum to reopen and how to book tickets

RHS Flower Shows at Cardiff and Chatsworth cancelled in 2021

The Garden Museum and Cafe to reopen after lockdown