It’s a no-brainer that slugs and snails topped the RHS Gardening Advice Service’s top pest of the year in 2016, or honey fungus was the top disease (it has been for the last 21 years).There is a north/south divide, with the south getting a host of new pests which haven’t reached us in the north yet, such as fuchsia gall mite and thrips outdoors.

There is a north/south divide, with the south getting a host of new pests which haven’t reached us in the north yet, such as fuchsia gall mite and thrips outdoors.

In 2015, slugs and snails, which had been the number one pests for eight out of the past 10 years, were pushed off the top spot by the box tree moth, but last year the pests were gardeners’ enemy number one again with a record number of enquiries. 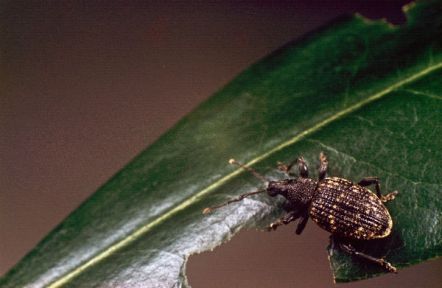 Fuchsia gall mite, first detected in mainland Britain in 2007, is now widespread in southern England. The microscopic mites infest new growth at the shoot tips, where they suck sap and secrete chemicals that prevent the normal development of leaves and flowers.

Glasshouse thrips were a greenhouse pest until 2008 when they began to be reported on outdoor shrubs, thought mainly to be in sheltered positions in warm urban areas. 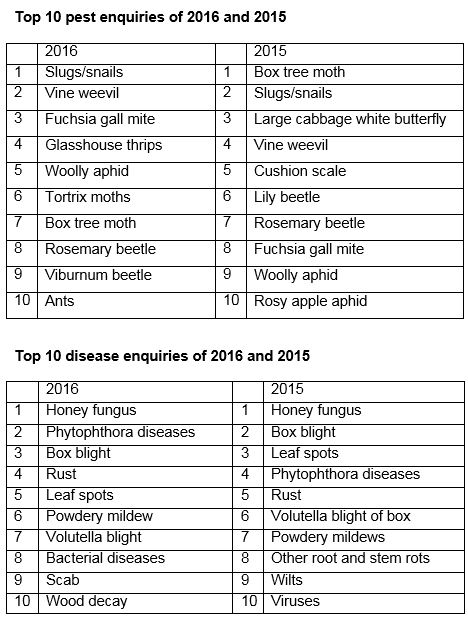 Also known as thunder flies, thrips feed by sucking sap from leaves and flowers. Adults have narrow, dark brown bodies up to 2mm long with an orange-tipped abdomen. Infestations are characterised by a silvery discoloration of the upper surface of leaves.

The weather had an impact on bacterial diseases, which thrive in moist, mild conditions, securing 8th place in the table, with RHS scientists dealing with twice as many enquiries about fireblight in 2015.

Fireblight is a bacterial disease that kills the shoots of apples and pears and their ornamental relatives. Symptoms include the wilting and dying of blossoms and shoots.

Scabs were named the 9th biggest disease problem, with the RHS recording a 65 per cent increase in the number of enquiries. Scab diseases disfigure plants by producing unsightly dark spots on the leaves. Blossoms and fruit can be attacked, and the vigour of the plant reduced.

Apple scab is a big problem in my garden. Other hosts affected by scab diseases include loquat, olive, pear, poplar, pyracantha, rowan, and willow.

RHS head of plant health Gerard Clover said: “Dealing with pests and diseases is an integral part of gardening and always has been.

“However, gardeners are not powerless against the threats posed by pests and diseases. Simple steps such as choosing more resistant varieties and taking an integrated approach to dealing with them, which could involve using a combination of controls together such as biological and cultural, can help gardeners fight back.”