Tone down the chilli heat and look for flavour

The heat is on… 2018 has been designated the Year of the Pepper, but there’s more to this vegetable than just fire.

If you’re wondering who decides this, Fleuroselect Home Garden Association, an international non-profit organisation, chooses a vegetable and flower each year, designed to boost seed and plant sales.

Seedsman Mr Fothergill’s wants gardeners to forget about the fire and explore the wide range of flavours in the chilli kingdom.

If you don’t like the heat, growing the world’s hottest chilli isn’t going to be your thing, but the capsicum family has something for everyone.

Just as sweet peppers have different flavours (orange cultivars are sweeter than red ones, and green ones have a level of bitterness) so too do chillies.

Among the commonly cultivated species, Capsicum annuum, chinense and baccatum, there are thousands of cultivars, with many different heat levels and flavours, from sweet to sour and smoky to fruity. 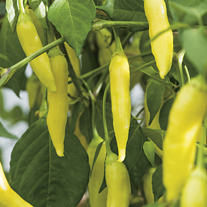 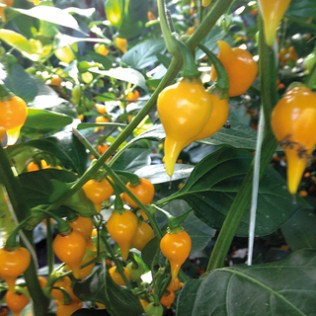 Mr Fothergill’s trials about 100 varieties each year. Trials manager, Alison Mulvaney, said: “We work with the top chilli breeders in the UK to find the best flavours and the best plants suited to UK growing conditions.

“The recent introduction of Capsicum annuum Biquino Yellow to our range is a perfect example of a chilli chosen for flavour, not heat. This mild Brazilian pepper carries an interesting smoky flavour with just a little heat to add a mild spice and aroma to any dish.”

Apart from C. annuum, mild Peruvian ‘Aji’ chillies are favourites with chefs at the moment. These Capsicum baccatum varieties produce an abundance of medium-sized chillies with a sweet, fruity flavour laid over a mild to medium heat.

Havana Gold is new for this season and is a good introduction to the Ajis, providing a complex fruity flavour and manageable, mild heat.

Capsicum chinense is the dominant species in the Caribbean, with fiery habaneros and Scotch bonnets bringing a balance of sweet, sour and fruitiness to dishes along with intense heat. There are also varieties that carry the pungent flavours with no heat, such as Trinidad Perfume.

The heat of a chilli is measured on The Scoville Scale in Scoville heat units (SHU), or capsaicin concentration, named after its creator, US pharmacist Wilbur Scoville. 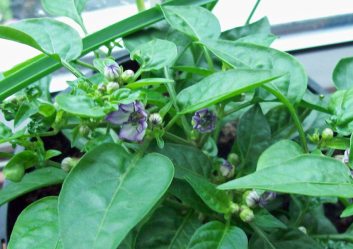 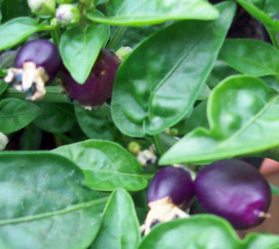 Chilli Loco in its purple phase

I’m no fan of hot chillies, but Loco is compact (about 2ft), bushy and covered with inch-long cone-shaped fruits held above the foliage like little fairy lights.

The fruits start purple/cream, changing from orange to red – the look like plump blackcurrants. Despite its name, Loco is not that hot, slightly less than a cayenne pepper, a medium heat level of about 24,000 SHU.

Which Gardening Chilli Trials 2012 recommended it as a Best Buy and it is UK bred, so makes an excellent plant for the patio.

Why are my runner beans purple?