Forget resolutions and let nature guide you in 2018

Setting out your stall with dreaded resolutions for a new year is rarely a good thing and always seem doomed to failure.

However, Monty Don’s January column in Gardeners’ World magazine provides a true Middle Way that might just last the course of the year.

“I try to garden with Buddhist detachment,” he says, taking the rough of 2017 (the failure of Salvia guaranitica and leonotis) with the smooth (tender annuals and Canna doing well). I tried to handle the death of my £69 standard pine that way. It didn’t go well.

However much we think our garden belongs to us and we are in control, we have to accept we are not and the sooner we do, the better it is for us and the healthier ecosystem we will become part of.

Monty cites the garden of Gilles Clément, whose garden La Vallée is ‘run’ with a very light touch. Pruning is forbidden and he mows paths around what has self-seeded, letting the ‘good’ (ie, healthy) plants dominate.

I can appreciate this, as I love self-seeders, the best (or worst) offenders in my garden being Echium pininana – they have totally changed the character of my garden for the better.

I’ve been attempting this after last year’s various illnesses, which meant I couldn’t do what I’d planned.

In my head, I’d created unachievable goals which doomed me to failure before I started and I then beat myself up about them. 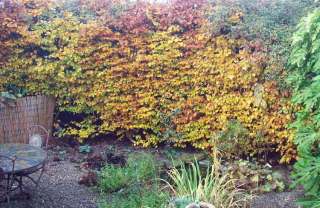 Pond in November 2014… before the Echiums 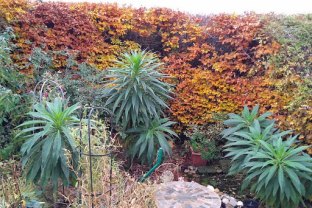 So how much gardening should you do? “Just enough,” said Gilles. Enigmatic, but it’s a focus on ‘light touch’ and ‘fingertip’ gardening – taking a step back.

My only plan this year is to put on warm clothes and boots and step out of the door, then do what literally falls into my path.

It’s a Zen-like philosophy which can only make you feel better when you decide enough is enough, whether it be 10 minutes or 5 hours later.

In the same edition, James Alexander-Sinclair does make a resolution – to go out into the garden for 15 minutes a day. We should all be able to fit that in, but I bet we don’t.

How to take part in the Big Butterfly Count

Why you should leave fledglings alone – RSPB