When cooked, varieties Mashed Potato and Baked Potato taste exactly as their names suggest – just like mashed and baked potatoes!

The cooked flesh of both types of squash is lower in carbohydrates and calories, and higher in fibre than that of potatoes.

Per 148g portion, Mashed Potato has:

Mashed Potato is a white-skinned acorn-type with almost white flesh that when baked, scooped out, mashed and seasoned has the look and taste of traditional mash.

Baked Potato is an acorn-type with pale butternut-coloured skin and off-white flesh that when cooked has the appearance, texture and taste of a baked potato.

“Jumbo plugs and seeds will be available, enabling gardeners and allotmenteers to grow these highly productive plants. In staff taste tests, we’ve been amazed at how similar to potato the winter squash flesh is!”

Both varieties typically produce 3 to 4 fruits of approximately 450-700g each. Squash plants are vine-like and will trail on the ground. 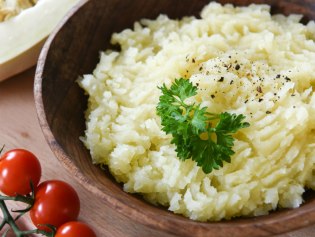 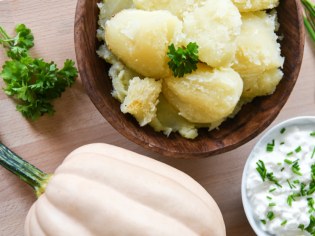 How to cook the squashes

Both types of squash should be cooked in the oven, with the cut side lightly oiled and placed cut side down on a baking tray, at 200°C for approximately 30 mins.

The flesh can then be scooped out and in the case of Mashed Potato, mashed with butter, salt and pepper according to taste and enjoyed as you would ordinary mashed potato.

For Baked Potato, eat the flesh as you would that of a traditional baked potato, with butter and cheese or any other filling of your choice.

Why are my runner beans purple?